When I was young, my upbringing was slightly different then my friends.  I was raised by Gay men, which in the early 70's was akin to be raised by wolves (albeit fabulous wolves) except there was a lot of tulle and ribbons.  Mom was a single working mom who was moving into the world she would occupy the rest of my life - the world of interiors, design, parties and flowers so who do you think her partners and friends were?  She tells me stories of how they cooed and oohed and dressed me up in elaborate get-ups, like their very own living doll, and would prop me up and say "Isn't she divine?"
No wonder that for the rest of my life I would always seek advice and fashion counsel from gay men.  Of course when it came to the messy bits, like poopy diaper or strained peas all over my cherubic little face - well they didn't like that part.  Mom came home once to 2 of her besties washing me off by holding me up in the sink and just spraying down my chubby little bottom with the spray attachment on the faucet while trying to hold their nose and not gag.  Gay men in the 70's who were out and proud had not yet evolved to the idea of having children themselves - as sadly it was not a situation society was ready to allow.  So the unpleasant and smelly part of babies was not fun - and "darling can you take her, I would just die if anything got on my silk shirt"

As I grew up - having gay men as "brothers" or "uncles" or just close friends in the family was something that was so everyday normal to me I never felt the need to address it or explain it until I had friends over in grade school who were baffled at to who these scantily clad man were, wearing more jewelry then their provincial Lily Pulitzer wearing mothers even owned and flitting around our chic black (yes black) pool floating gardenias in it because it was elegant.  When I would look at my friends alarmed big eyes I would turn to my current uncle of the moment - try and see what was so odd about them , shrug my shoulders and move on.  I didn't see the problem, never did, and for a young girl who was unnaturally obsessed with angst over body image and trying to fit in,  this was one area of my life that was glaringly odd yet didn't bother me in the slightest.

I got cooler presents then my friends (box full of feathers anyone), witnessed crazy fun parties unlike any of my other Main Line of Philadelphia friends parents threw ( I did wonder why NONE of my friends parents mixed socially with mine until I witnessed a party at one of their houses and was so bored I wanted to drown myself in my shasta). Parties at my house tended to be elaborate, many times costumes and inevitably ended up with drunk people in the pool, with very little clothing on.  It was pretty awesome to spy on.

I learned about art, and fashion, textile and flowers.  Then sadly I also learned, to young about the cruelty of  people who were anti-gay, and was educated all to personally about the devastation of AIDS.  I was the only person in my high school that I knew who lost a close close friend to AIDS.  I still remember our last Christmas with him and gained new-found respect for my stepfather who was from an even older generation, one that didn't accept or acknowledge homosexuality.  He accepted and loved Michael and as a doctor sat me down and educated me on the realities of AIDS.  You will NOT catch it by hugging the person you love etc and told me not to be scared and to treat him with all the love and respect I ever had for him as he is the same person and we wouldn't shun him if he had Cancer would we?

So in my life I have always had gay men and then when I became an adult gay women as a regular everyday part of my life without ever giving it much thought.  I love the fact that now a days my generation finds no reason to make someones sexual orientation an issue. Well ok maybe just the people I surround myself with, I know there is a whole country of small minded bigots still roaming around.  Sad.  I feel sorry for them.

So I know why I love gay men and why one of my best friends today is one, but I never understood why they loved me so much until last night.

Last night my bestie took me as his date to a very swanky fundraiser for GLAD at one of the most amazing estates (complete with yacht) in our tony neighborhood.  I really should have taken pictures but I found juggling my beautiful clutch purse, a glass of wine AND trying to balance on a twisted ankle was far to much for me to handle.  iPhone camera or wine?  If you know me you know what I chose.

When some of my new friends were gushing over how fabulous I was and how much they loved me, I naturally assumed it was my witty and charming personality filled with funny anecdotes as well as my ability to listen to them talk about themselves and tell them how fabulous they are (note when you are a straight women surrounded by gay men - you need to do this and you will get a lot of compliments and love in return)  But no, I was wrong, while they did adore my self deprecating humour, what I found made me so popular - the veritable straight girl belle of the gay ball was something I never would have expected.  It was - wait for it......my breasts.

Seriously?  My boobs, my girls, the amazing cleavage they were presenting and then when the boys found out that they were REAL?!?! WELL!!! (In South Florida finding a girl with real boobs of my size is a little like finding a pearl in an oyster...OK a slight exaggeration but you get the point).  So for the rest of the night as the liquor flowed I continued my education on the dating/mating rituals of gay men - not for the shy girls, it's all in the details, and was treated to constant glowing praise of a part of my body that I was blessed with and have absolutely no hand in.  Well not true - being 10 plus pounds overweight at the moment only increases their - well attributes.  The best part is that they very sincerely made me feel beautiful, their compliments were not sexual in nature, from a straight guy it would be downright pervy they were an honest appreciate for a women's body part that some (not all) gay men have sincere envy over.  Who knew?

That's what I love about life in general - you think you know all there is to on a subject, being surrounded by gay men my whole life I was feeling rather self-important in my knowledge and then a curve ball comes out of left field and you learn something new.  Something fabulous in my mind!  Oh yeah and last night I learned something else (well many things but some are not fit for a PG blog) and that is that all the best looking men in Fort Lauderdale are in fact Gay. 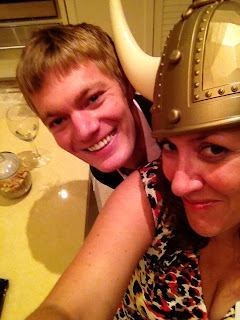 "Is the viking helmet to much?"
"No darling you look fabulous"

Posted by Amanda Nicole Dugan at 6:51 AM