We had another Super Moon.  It was national Rat catchers day, and that is a career choice that gets very few accolades I am sure.  Here in Florida we had an entire day without rain.

Of course all the news of the day was eclipsed by the "Big One". The world's most famous baby was born in London. If you have no idea what I am talking about the only plausible explanation could be that your DSL, Cable AND cell phone service was down. Or you are in a jungle somewhere, although you probably could still log onto Facebook.  I never turned on my computer but I heard about it.  It was hard not to. Prince (he who shall not be named in public yet) welcome to a world of privilege and infamy very few people on the planet will ever know, oh and SMILE you will be growing up on TV, the internet and in every magazine imaginable. In short a fishbowl.  A royal one, but a fishbowl none-the less.  Poor kid.

Personally I am waiting for the little tykes official (buckingham palace moderated of course) Twitter account to start rolling out. God forbid we miss an announcement about what color his poo is. I wonder if his nappies will be royal issued, or from Tesco.  I'm going to split the difference and say Mark and Spencers or Harrods at the very least. If Harrod's doesn't carry nappies yet sure as shite they will carry them now!

I jest, because this is actually NOT a post about hating on the wee royal lass, not at all. The contrary in fact!  A baby is a baby.  They are a blessing, a joy and an occasional anxiety inducing nightmare all rolled into one!  And when they giggle, if your heart doesn't melt you don't have one.  The Prince and the Duchess have a long incredible journey in front of them and no matter how many nannies they have, they will be sleep deprived, exhausted, scared and deliriously happy as many new parents are You can't help where and to who you are born to to little prince, but Prince William and Duchess Kate seem to be very level headed genuine and down to earth people, for royalty.  They are the modern day monarchs and I am sure will raise a very solid, grounded little person and future leader. I truly wish them well. I have never had the "magical joy" of giving birth but I am blessed that I am able to help raise my niece and nephew.  Who knows?  I may have more nieces and nephews in the future - and being a Zia is pretty amazing.

Here in this household of everyday average poopy diapers from Publix, the LittleDude and LadyBug are doing everything a 21 and 9 month old should be doing.  Acting like children all over the world.  This is my sincere hope.

You see these angels? 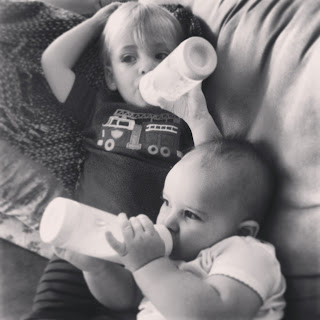 Well recently Prince LittleDude has been going from Angel to Devil's spawn in the blink of an eye.  I mean serious knock down, thrashing on the floor, hitting, kicking, slapping screaming until red in the face tantrums that half the time we can find zero rhyme or reason to.  Oh and the cherry on top? He no longer wants to go to sleep. Or stay asleep. Period.

Goodbye child modeling career.  Oh and Money see Monkey do.  Princess LadyBug is become one tough ass little miss. Good news, she isn't letting ANYONE, including a big temperamental brother push her around. She is happy, determined and loves to smile and giggle, but takes shit from NO ONE.  This could be very good or very bad for us as she hits toddlerhood, but only time will tell.

Sis found a hilarious article about 46  reasons a 3 year old might be having a meltdown. Check it out here.

Funny, facetious and terribly terribly true.  After laughing we have both been looking for answers on the internet and have read a lot about why this is happening, his stage of development and frustration, being overwhelmed and unable to express himself in any other way then throwing something across the room.  On one hand I feel better, his behaviors and entry into the "Terrible Two's" is completely normal. On the other hand by the end of a day with 2 dozen tantrums behind us and 30 mins (on a good night) of screaming instead of going to bed ahead of us - Zia generally pours herself a big glass of "today is almost over, I can make it through the rest"...otherwise known as wine.

It's sis I feel sorry for, the only way to get him to sleep is for her to bring him into her bed, a habit she (and I ) are scared to create - but the alternative is having the condo board kick us out for excessive noise violations. So she gets more sleep deprivation minus the wine. She has it rough, but in fairness I do cook incredible meals for them daily (more on that in another post), and we are all in this together as a household.

If you can believe it LadyBug sleeps right through it in the crib right next to him.

Someday not in the very far future the royal baby who is 3rd in line to the monarchy of the United Kingdom, will most likely throw a royal tantrum - or 12 - at a royal family event. It could be in front of dignitaries from around the world, or just the Queen mum, but it will happen, because royal, or not every kid goes through it, can't be trained not to and thats a fact.

It's only fair right?